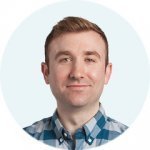 Allow snap() util to use "radius" without an array of values